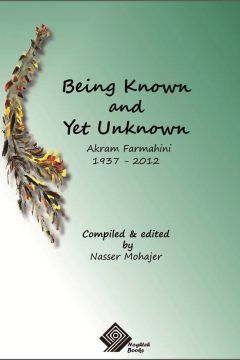 Being Known and Yet Unknown
This is a collection of writings by associates, friends and a few relatives of the late Akram Farmahini who passed away in January 2012 in Paris.
Akram Farmahini, artist, painter and designer was educated in the Institute of Decorative Arts of Tehran University. She was married to Bagher Moemani, a well-known historian and public intellectual.
Being Known and Yet Unknown not only introduces the reader to the persona of a female artist, but through different narratives of her life, it depicts achievements as well as obstacles for the advancement of the educated urban middle-class women in the context of the hundred-year transformation of women’s socio-economic conditions specially during the rule of Shah Mohammad Reza Pahlavi. The last chapter of the book features a selection of Akram Faramahini’s paintings and sketches. ISBN: 978-0-9828408-7-0