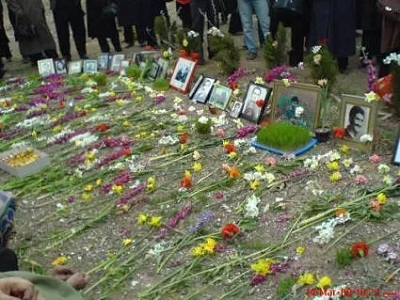 Voices of a Massacre: Untold Stories of Life and Death in Iran, 1988, edited by Nasser Mohajer, is a painstakingly compiled account of the ordeal suffered by the thousands of Iranian political prisoners who perished in the summer of 1988, including the testimonies of those who survived. It bears witness to a national tragedy.

Angela Davis, the famous African-American activist, now a professor at UC Santa Cruz, writes in the introduction to the book, “There may be those who argue that these events took place long ago and that there is little to be done today, but the fact that it has been more than thirty years since this atrocity took place is an even more compelling reason why an international solidarity movement is needed to support the demand to render the Islamic Republic of Iran accountable for past as well as ongoing acts of repression.”

The book, which took ten long years of research to complete, is divided into six chapters in which 25 eyewitnesses talk, in harrowing detail, about the massacre that took place at the end of the Iran-Iraq war, in the summer of 1988, as per a fatwa issued by Ayatollah Ruhollah Khomeini, the founder of the Islamic Republic. Declaring that he had drunk the cup of poison ending the war, Khomeini ordered a “final solution” to the plight of thousands of political prisoners who had been incarcerated for years, having undergone horrible torture and awaiting the termination of their sentences. […]