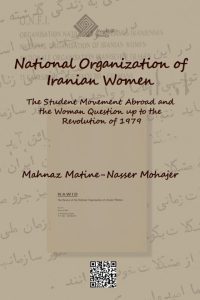 Mahnaz Matine – Nasser Mohajer
The National Organization of Iranian Women (NOIW), established in January 1965 in close association with the Confederation of Iranian Students, was the first organization founded by Iranian women abroad. The organization did not remain active for long and by the end of the 1960s had all but dissolved.
Research into the history of the first Iranian women’s organization abroad sheds light on the attitude and approach toward the question of women, by an important segment of the leftist and democratic forces that participated in the process. This attitude that evolved in the 1960’s largely informed the disposition adopted by the leftist forces on the women’s issue in the following decades, the consequences of which became apparent especially after the 1979 Revolution.
This book consists of three chapters. The first chapter delves into the origins and the formation of the NOIW, examines the intellectual leanings and ideals of its founders, explores the interplay between the NOIW and the Confederation of Iranian Students, and highlights the achievements of the organization and the problems and obstacles that led to its premature demise. Chapter 2 recounts conversations with several leaders and members of the NOIW, as well as with Majid Zarbakhsh, one of the secretaries of the Confederation who was the principal liaison on behalf of the Confederation with the NOIW. The third chapter is a selection of documents that helps the reader to better understand the rise and fall of the National Organization of Women of Iran.