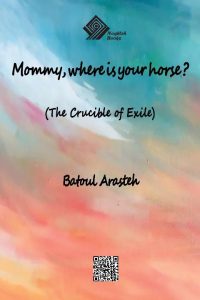 The book interweaves scattered fragments of the life of an urban Iranian woman who, in her youth, is exposed to social justice and democratic ideals, and as a young woman participates in the mass uprisings that culminated in the 1979 Iranian revolution. She joins a leftist political organization as part of the greater revolutionary movement. After Islamic hardliners consolidate their power and unleash a campaign of terror against an array of opposition forces, like thousands of others, she goes underground. As intense state crackdown leads to the disintegration of her political organization, she sees no option but to flee the country. She has to leave her toddler behind, as smugglers lead her, along with her husband and her three-year-old daughter through the treacherous mountains of Kurdistan and into Turkey. After a journey through several European countries, they finally arrive in France where they seek political asylum. And eventually, she’s reunited with her youngest daughter in France.
The author does not delve too much into the details of her political activism in the Islamic Republic of Iran and the organization to which she belonged. Her narrative focuses more on her “inescapable escape” from Iran and the trials and tribulations as an exile including the loss of her mother, father, and a close friend.