Islamic Republic of Iran (Paradoxes of Reform and Prospects of Rebellion) 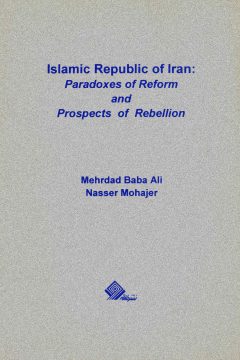 Islamic Republic of Iran (Paradoxes of Reform and Prospects of Rebellion)
This book focuses on the question of reform and revolution, different types and plans of reform and the relationship between reform and qualitative evolution (overhaul) of the system.
The gist of reform, as well as revolution, their similar aspects in responding to the political crisis and social upheavals is discussed in the first part of this study. While the authors explain some well-established views on the distinctions between revolutions from reforms on the basis of violence or nonviolence, they suggest new criteria for this differentiation. Then two different methods of striving for reform are discussed, one known as “crawling and gradual” and the other as “radical” aiming at the total transformation of the existing regime.
The second part of the study deals with the history of reform in the Islamic Republic of Iran (IRI), the course of its evolution and finally the failure of the idea of “reform from within”. The impossibility of structural reform of the IRI is also discussed in this section.
The third section of this booklet is dedicated to the question of “regime change” and how this strategy is perceived by the existing spectrum of those opposing the IRI. According to the authors, relying on the military intervention of big powers and outside forces to achieve this goal, stands in contrast with the ideals and ethics of a genuine democratic force who deems “ends do not justify the means”. In turn the overthrowing of the regime by civil disobedience and international pressure is suggested.
Finally it is argued that any referendum in the country should be held after (not before) the establishment of the constituent assembly and the compilation of a new constitution.