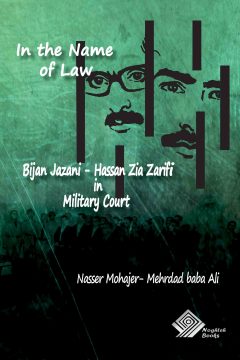 In the Name of Law (Bijan Jazani & Hassan Zia Zarifi in Military Court)
In the Name of Law is a case study of the arrest and trial of Bijan Jazani, Hassan Zia Zarifi and other twelve members of a newly formed revolutionary group which later became one of the two pillars of the Iranian Peoples Feda’i Guerrillas. This exceptional trial that lasted from December 30, 1968 until February 27, 1969 is considered as one of the most important political trials of the 1960’s in Iran.
Reflecting upon the political events and social climate of the time, Nasser Mohajer and Mehrdad Baba Ali have deconstructed the defense arguments of Jazani and Zia Zarifi. In their 100 page-introduction they demonstrate how a worldwide international campaign in concurrence and coordination with the immediate family and friends of prisoners succeeded in saving the lives of the accused.
This book is appended with three rare documents which are published for the first time.
The second edition of the book includes several previously undiscovered and unprinted documents such as the diaries of Mr. William Wilson (ex- British MP), an interview with Mihan Jazani, wife of the late Bijan Jazani, Mohammad Majid Kianzad, one of the fourteen, and Mr. Hedayat Matin-Daftari, the esteemed lawyer and friend of Jazani and Zia Zarifi.
ISBN: 978-0-9980861-1-8