The Workers in Bleak Time

Edited, annotated and with an introduction by Nasser Mohajer & Assad Saif 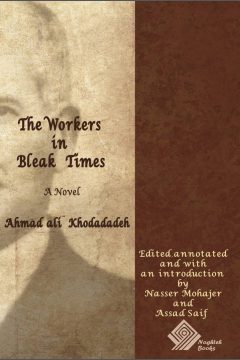 The Workers in Bleak Times (Ahmad ali Khodadadeh)
Published in the second decade of the twentieth century, The workers in Bleak Times is the first novel of the Iranian workers’ literature. According to its author Ahmad Ali Khodadadeh, this novel is more than just a story, it is about the living conditions of Iran around a century and a half ago. The novel depicts the simple life of peasants and delves into the socio-economic structure of Iran’s western provinces between 1895 and 1925. It is a real depiction of how poor peasants lived. Further themes include oppression against them by land owners, insecure roads, lack of sanitation facilities and broken social infrastructures.
Women are not quite colorful in this novel as other novels published at that epoch.But in Workers in Bleak Times they work hard and are not confined to the household. Children work from a very young age if they are lucky to survive and grow to be adults.
The story is about a dark and sad Iranian society, molded by the administrative apparatus and the vast bureaucracy of the Qajar dynasty, merchants and the clergy. The author also critiques the simpleton behavior of the victims in the society and advocates for a more modern relationship between different forces. He firmly believes that the Shi’ite clergy has played a major role in keeping the Iranian people backward and ignorant of their history as well as global developments.
ISBN: 978-0-9828408-2-5