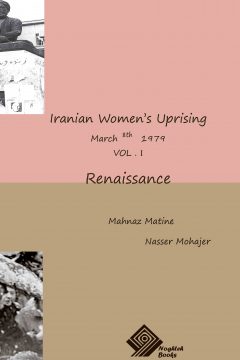 Iranian Women’s Uprising
(Vol. 1 – Renaissance)
This two-volume book is the untold account of the March 8, 1979 peaceful uprising of the Iranian women, pouring into the streets of Tehran protesting against Ayatollah Khomeini’s call for mandatory veiling of Iranian women working in the public sector and educational institutions. This first massive protest movement to the rule of Shiite clergy and the Islamization of Iran, was soon joined by women and also men of six major cities throughout the country and lasted for six days.
The extensive research for this book includes an enormous collection of hundreds of old and newly published magazine articles, newspaper reports written in Persian, English, French and German, video clips, photos, footages and also a few pamphlets and booklets written on the subject. The first volume also contains the testimonies of some of the organizers and participants of this historic uprising who were from all walks of life, such as students, civil servants, academics, lawyers, activists, house wives, nurses, workers and…
ISBN: 978-0-9828408-1-8 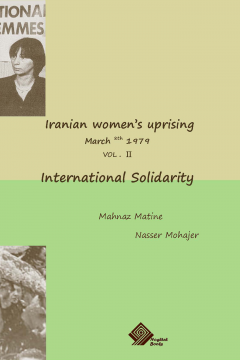 Iranian Women’s Uprising
(Vol. 2 – International Solidarity)
The second volume of Iranian Women’s uprising, archives the extensive international support and solidarity lent to Iranian women in struggle by women’s associations, prominent feminists, and women’s right activists . Hundreds of gatherings and marches were organized in cities like Rome, Milan, Barcelona, New York, Montreal, Vancouver and many others across the world to support the Iranian women’s uprising of March 1979.
The co-editors of these two volumes, Ms. Mahnaz Matine and Mr. Nasser Mohajer have concluded that: “although internationally the uprising enjoyed a great deal of support and solidarity, unfortunately the entire political spectrum in Iran including the liberals, left forces and the centrist individuals and parties did not recognize the importance and potentialities of the uprising, and consequently did not support its sole demand which was to rescind the mandatory Hejab for women and respect for individual liberties.” ISBN: 978-0-9828408-0-1