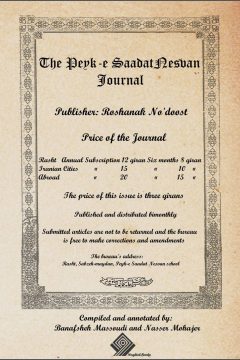 The Peyke Saadat Nesvan (Journal)
The Payk-e Saadat Nesvan Magazine was the first journal published by Iranian women’s rights activists and the first journal produced by left-leaning women in Iran. Its concessioner, Rooshanak Nodoost, was one of the most progressive women of her time whose life story is included in the preface by Banafsheh Massoudi and Nasser Mohajer. She was also the principal of the Saadat Nesvan School in Rasht about which newfound information is included in the 42-page preface.
The Payk-e Saadat Nesvan Magazine was first published in September of 1927, till August of 1928, six issues were distributed in major cities in Iran, reaching women’s rights advocates.
This debut republication of the six issues includes annotations and elucidations by the editors which shed light on hidden aspects of the hundred-year-old history of Iranian women’s struggle for equal rights and human dignity.
ISBN: 978-0-9828408-3-2