Fallen, Aspiring for a Better Tomorrow 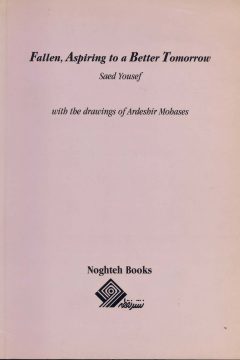 Fallen, Aspiring to a Better Tomorrow (With the drawings of Ardeshir Mohases)
This book includes a note by Nasser Mohajer, Saeed Yousef’s long ode, four sketches by the late Ardeshir Mohassess specially made for the ode and finally a few points by the poet.
At the beginning, Nasser Mohajer writes:
“The “Bereft of life, in hope of a fresh start” ode is our prominent poet visit of the Slaughterhouse/Abattoir and his versified elegy for the/that Massacre in a dramatic style.”
“… As readers of this prodigious ode, the first poem about the horrendous Massacre of 1981, we find ourselves at once in the Islamic Republic Prison… and then intimately feel the inside, the mood and ambiance of the Slaughterhouse-Prison. Seeing the henchmen treatment of the Leftist and Mojaahed prisoners; and hearing their conversations, we figure out that each prisoner who was sentenced to death had refused to perform the Islamic Prayer in one way or another… And the climax of the ode is the recount of the will of a young mother who was handed to the death squad right after giving birth to her newborn; she recites to her hope, her baby:
“Do not be sorrowful, I die smiling,
“With happiness and joy, singing,
“Might’ve you seen my execution,
“You’d be awed by my honorable dying…”