Edited by Nasser Mohajer
From Tehran to Stalinabad (Mohammad Torbati) 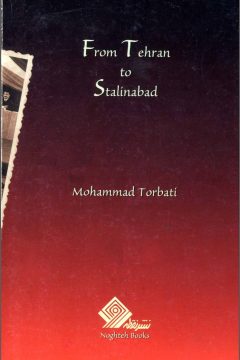 This book is Mohammad Torbati’s memoirs of 50 years of political activity within and without Iran’s Tudeh Party. He joined this pro-Moscow left wing party in the year 1943. He was forced to live underground after the 1953 military coup against the democratic government of Dr. Mohammad Mossadegh.
Torbati escaped Iran for the USSR in 1955. He lived in Ashgabat, Dushanbeh and Moscow until he moved to Prague in 1957. Here he resumed his political activities with the Tudeh party and attended the party’s seventh plenum. But soon after he became disenchanted with the Tudeh Party and upon the party’s 11th plenum in 1965, he took distance from it and focused on academic studies. He graduated from the Academy of Science in 1966 and started working as a researcher at the Prague Economic Institute.
At the time of what is known as the Prague Spring in 1968, he sided with the pro-democracy wing of the communist party and after the suppression of that progressive movement he left both the Communist Party of Czechoslovakia and the Tudeh Party of Iran.
Torbati returned to Iran after the 1979 revolution but could not tolerate the newly established theocracy and soon returned to Prague.
His memoirs is one of the best documentations of the Tudeh Party’s history from the perspective of a low ranking party member.